The Electronic Voice Phenomena or EVP equipment encompasses all anomalies, including speech and voice, which holds no reason or scientific explanation behind it. It was in the June of 1959 when this concept took shape.

Spirit communication and the mysterious human behaviour surrounding it have always been intriguing. Especially for those who study psychology and teach human development. All religions have their perspectives on spirit communication. You might use the most modern scientific equipment to debunk paranormal and spirit communications, but you may still go to a temple, church or mosque to perform rituals or to know more about internal energies. And there is nothing wrong with it. The fact that spirit communication is, has been, and always will be part of the human condition and psyche cannot be altered. In this excerpt, we will talk about the history of EVP equipment and whether it is real or not in a paranormal investigation.

As I always believe knowledge is your best tool to debunk these mysteries. All one needs to do is study, research and talk to similar minded people to understand more about these phenomena. Ghost communication has significant value in paranormal investigation. EVP equipment also serves as a shred of excellent evidence proving the existence of spirits. EVPs are the most viable option wherein we have concrete evidence, unlike with orbs.

What is EVP Equipment?

The science of paranormal investigation encompasses various tools and technologies. These technologies aim to collect data to determine if a certain location has any paranormal activity or not. These technologies can assess electromagnetic fields, temperature change, vibration, and motion. They can also detect sounds that otherwise the human ear can not make out. The study’s primary focus was placed upon voice-like noises caught on digital recording devices that are not heard in real-time by the human ear.

The Electronic Voice Phenomena or EVP equipment encompasses all anomalies, including speech and voice, which holds no reason or scientific explanation behind it. It was in the June of 1959 when this concept took shape. Friedrich Jurgenson was making recordings of bird songs when he heard sounds resembling voices in the recording. He initially dismissed the voice as unwanted noise. But when he noticed a pattern of voices discussing the songs of the birds, he was left stunned.

The inexplicable connection between the voices and the situational context led Jurgenson to continue investigating and attempting to capture more of these anomalous voices. Jurgenson produced several literary pieces reporting his findings. This in turn stimulated the interest of other scientists such as Dr Konstantin Raudive. Research and use of digital recorders in an attempt to collect EVPs have since expanded and progressed throughout the years. They are now a normal part of scientific practice in paranormal investigation.

The birth of the famous EVP (electronic voice phenomena) can be attributed to Thomas Edison. This is because of his inventions of phonograph and recording. Thomas Edison was known to be involved in the spiritualist movement that was popular in the US and abroad. The time period was in the late ’20s and ’30s, near the end of his life. Edison experimented with a spirit communication machine, which he did not name as far as I could determine in my research. Unfortunately, he died in 1931 before he could document any results from the machine. The machine itself is in the Smithsonian museum in Washington, DC.

In 1982, a woman named Sarah Estep from Severna Park, MD began the American Association for Electronic Voice Phenomena (EVP equipment). She began it with the intent to prove that there is life beyond the physical plane. Her research began as an attempt to contact her departed husband. That same year, Sarah published a book entitled Voices of Eternity (Mass Market Paperback, July 1988). In the book, she wrote about her fifteen years of EVP research. She retired from doing active investigating around 2000.

To Wrap it Up

Countless paranormal societies across the nation and the world currently use digital recorders and other recording technologies to capture and examine EVPs to assess their relation to any given location of focus. Considering paranormal entities possess no physiological mechanisms to produce speech as humans would, these entities possess the ability to manipulate energy to signify their presence. One measures this during investigation practices using electromagnetic field meters, infrared meters, and so on.

These devices capture drastic and unexplained energy changes throughout the affected environment. These theories have carried over into the rationale for Electronic Voice Phenomena. Paranormal entities manipulate sound energy to communicate through EVP equipment. Capturing the evidence of paranormal activity is the ultimate goal for a paranormal investigator. Sieving through the footage for the... Paranormal investigators are making use of thermometers to find out if there is a temperature drop in the surrounding area... Depossession Instructions – How to Do It?

According to paranormal experts across the world, the best way to perform a depossession is to record it. You can... Electronic Voice Phenomenon: How to Get an EVP?

Now that you have a basic idea about what an electronic voice phenomenon or EVP means in a paranormal investigation,...

What is EM Pump?

You may have seen an EM pump used by a paranormal investigator on some of the paranormal shows. Do you... 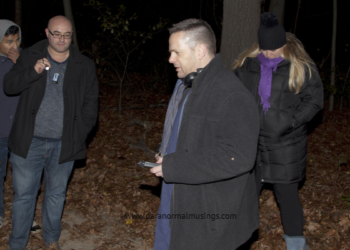 What is EM Pump?

Electronic Voice Phenomenon: How to Get an EVP?